Captain America Will Be Running the Show in "Age of Ultron" (Yahoo.com) 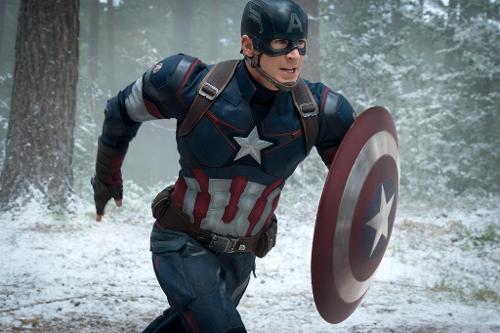 Jeremy Renner is set to play Hawkeye for the third time in Avengers: Age of Ultron, and writer-director Joss Whedon told us the eagle-eyed archer will have lot more to do in this film than he did in the first one, in which he spent much of the film under Loki’s spell.

He’s not the only one with more to do, though. It seems all the team members will have their work cut out for them when it comes to dealing with Ultron and his countless drones.

We caught up with Renner and Chris Evans between takes on the film’s Shepperton, England set to talk Hawkeye, Captain America, and the challenges involved in making the sequel to the most successful superhero film of all time.

Here’s what we learned.

The Avengers will get more action scenes together

“I like all the scenes that we get to have together,” says Evans. “In this movie, it’s not about having stand-out moments, it’s about trying to have stand-together moments. You want to have scenes where you’re like ‘Man, the Avengers just kicked ass!’”

“If it’s every man for himself, then it defeats the purpose of what this movie is. We have individual films for that. So I like the scenes where – as a unit – we’re all wrecking shop. And we get a bunch of those in this.”

'Age of Ultron' is “smaller”

How do you top the biggest superhero of all time? It’s a valid question and it’s one that Renner asked the director himself.

“I remember talking to [Joss Whedon] after the fact, after seeing that movie and being like: ‘How do we do another one?’ Where do we go?’ Joss said: ‘Well, you gotta go smaller.’”

“[After seeing] the script, ultimately, I feel like it’s bigger. There’s a lot more action, a lot of new characters, and that makes it more complicated, but also there’s more intimacy in this one unlike the last one.

“There’s a lot more of us together, which I think is really interesting. I think this is an impossible script to write, from the first one to now: There a lot of people and stories to try to tell and he does a really good job with it, and he keeps it very real.

“There’s such a humor to it and that’s all throughout this as well.”

The events of last year’s Captain America: The Winter Soldier left the Marvel Cinematic Universe in tatters, with S.H.I.E.L.D. dismantled, and Nick Fury on the run. This means the Avengers are essentially freelance heroes now.

“I think [Captain America] feels very comfortable in a sort of leadership role, but I don’t think he gives orders,” says Evans. “He does structure, organization — he’s a military guy.

“Tony [Stark] is definitely paying the bills, and since there really is no company to report to, we’re kind of this independent unit that needs to rely on each other and work as a team, even in their day-to-day lives.”

Quicksilver and Scarlet Witch could be good and bad

Age of Ultron will see the introduction of sibling superheroes Quicksilver and Scarlet Witch, played by Aaron Taylor-Johnson and Elizabeth Olsen, respectively. Trailers for the film suggest they’ll initially side with Ultron, but Renner says things are never that simple in the Marvel Cinematic Universe.

“We’re all sort of broken in our own right, you know, which is what I think is so great about it,” Renner explains.

“I think the new characters are just as broken, complex, and confused. You’re asking whether they’re good or bad? Look at my character: I was a bad guy through most of that [first] damned movie!”

‘Age of Ultron’ is a family drama

“In order for all the Avengers to really get together, it has to be a global thing or sometimes [an] interstellar [thing],” Renner tells us.

“The Avengers is like The Bad News Bears, but there needs to be a reason for all of us to get together, and when we’re a team, we’re pretty unstoppable. They’re all flawed, and [there’s] conflict and tension amongst the Avengers … but when we actually unite and sort it all out, that’s the arc and the journey in any Avengers film.”

“It’s like a family thing” adds Evans. “If [Captain America: The Winter Soldier] was a conspiracy [film], and Thor is [a] fantasy, this is like a family drama. That’s what Jeremy said so well: Joss made this with loads of really nice intimate, human, grounded moments.

“Even though this is a giant superhero movie, I think what this tone will be — or this sub-plot or sub-theme will be — is this family dynamic with family struggles and human relatable conflict… aside from us wearing costumes and flying around.”

A lot has happened since the last ‘Avengers’

One thing that producer Jeremy Latchem told us on set was that all the main characters get detailed notes on what their characters have been up to in the years between the films.

However, both Renner and Chris Evans – who plays Captain America – were unwilling to share their notes for fear of spoilers when we asked what Hawkeye had been up to.

“That really is on our list,” helps Evans. “I have a list — I can’t show you it of course – of things you do not talk about!”

“You’ll understand when you see the film,” adds Renner.

There are no plans for a solo Hawkeye movie… yet

Despite Clint Barton’s two Avengers appearance — and his fleeting Thor cameo — there’s no sign of Hawkeye getting his own spin-off just yet. He’s rumored to be appearing in Captain America 3, but Renner says his own solo film seems a distant possibility.

“Those things are in the future,” he says. “This movie has still got to do well for there to be an Avengers 3. No one is counting that egg.

“We just make the best movie we can now, and if Avengers 3 rolls around, and people want to see that, then that happens. If there’s anything else that happens, that’s not really for any one person to determine.”

Avengers: Age of Ultron opens May 1.